The first meeting “Latin America and Africa. Women, land and work”, organized by the CIPDH-UNESCO, was held

The first meeting “Latin America and Africa. Women, land and work”, organized by the CIPDH-UNESCO, was held

This event is part of a series of activities aimed at analyzing the challenges faced by women and their contributions to local, national, regional and international economies.

On July 8, the first meeting of a series of events organized by the CIPDH-UNESCO took place, aiming to analyze the challenges faced by rural women in these regions and reflect on their historical and emerging demands. The event was developed through Zoom and was also broadcast through Facebook Live.

In the opening, Fernanda Gil Lozano, CIPDH’s executive director, stressed that “making rural women visible is our duty,” in addition to expressing the interest of the center she directs in working especially with women from Latin America and Africa. Gil Lozano recalled that “many things that women were proposing in the 70s and 80s, we have been obtaining, with work and in peace.” In addition, she especially thanked Adriana Arce, former director of CIPDH-UNESCO, and Dr. Lidia Brito, UNESCO Regional Director of Science for Latin America and the Caribbean and a member of the CIPDH-UNESCO Board of Directors, for the ir presence at the meeting. For her part, Brito congratulated the CIPDH-UNESCO for the initiative and expressed her satisfaction “seeing that the cooperation ties between the regions remain in full force, as well as the great role of women in these spaces”.

The activity consisted in the presentation of different local experiences and its first part was presented by Elena Hanono, member of the CIPDH-UNESCO on Science, Technology and Integration Projects. Colombian sociologist, environmental activist and community feminist Isabel Zuleta offered details of her work in her country with the Ríos Vivos Movement for the defense of the environment, of which she is the founder. Zuleta highlighted the “painful situation” that Colombia is experiencing, recounted the process of resistance faced by women in the Cauca area and criticized the actions of the Colombian State in the face of mining projects’ advance that caused “loss of memory sites and revictimization”. For her part, Maze Morais, Secretary for Women of the CONTAG (National Confederation of Rural Farm Workers and Family Farmers) in Brazil, recalled how the so-called Marches of the Margaritas are developed: massive mobilizations that take place every four years towards the capital of the country and which he defined as “the result of the self-organization of peasant women, indigenous women and other organizations, with the motivation of making the work of agricultural women visible and claiming various rights.” Later, Ana María Riveiro, Argentine lawyer and member of the Cooperativa Colonizadora de la Federación Agraria Argentina, recounted the fight that took place in the 1990s in the country against the judicial auctions of small producers’ properties, from the Women’s Movement in Struggle. Ella Rivera explained: “we formed assemblies and we decided to make our own the slogan that solidarity was the only thing that would save us. Every time they took action against one of us, we all mobilized”. To close the first part, Salma El Ouazzani Chahdi Sendaoui, doctor in Law and official at the Moroccan Ministry of Human Rights, recounted the experience of women in Morocco in relation to land tenure and the conquests obtained in recent years . She explained that the right of exploitation in her country was granted to male heads of the family, that the regime was “patriarchal and discriminatory, with women excluded from the distribution of land,” but that in 2007 the Sulaliyat movement was born. of women, who gave a great fight in the recognition of effective gender equality in the laws relating to collective lands.

The second part of the meeting was presented by Pía Berdiñas, a member of the CIPDH-UNESCO on issues of Inclusive Local Public Policies and the Promotion of Human Rights. Martha Mateo, a member of the Dominican Republic’s Movement of Working Women, recounted the process of struggle for land that unleashed in 1972 in the community of Parra. Mateo also explained how the organization was able to develop a few years later to work the land and avoid the police siege, and finally how the process of cohesion and progress with her colleagues was like to support the fight for women’s access to work, jobs and places of political decisions. Dora Flecha, Coordinator of the Women’s Front of the National Peasant Federation of Paraguay, elaborated on the conflicts over access to land in her country and on the growing role of women in this process. “In 1989, when the dictatorship fell, we thought things would be simpler. But in any case, through the struggle we have conquered more than 300 thousand hectares that today are productive, and in 2007 we obtained free medical studies for children and mothers”. Next, Antonia Chávez, Mexican teacher and researcher, Counselor of the “ObservaLAtrata”, presented details of the agricultural policy carried out during the Cárdenas presidency. A project that promoted education, training, credits for farmers, rural schools, health and social services, access to water and electricity and that “allowed professional and economic development for women,” according to Chávez, was gradually dismantled towards the end of the of the last century by the neoliberal policies applied in her country. Closing, the historian specialized in African studies and professor at the University of Buenos Aires, Marisa Pineau, congratulated the CIPDH-UNESCO for the initiative to focus on these issues, and pointed out that in Africa, despite the program of access that many countries began to implement already in their process of independence from the European powers, “women only have access to 15% of the land, when the work is 50% rural, manual and mostly carried out by women”. 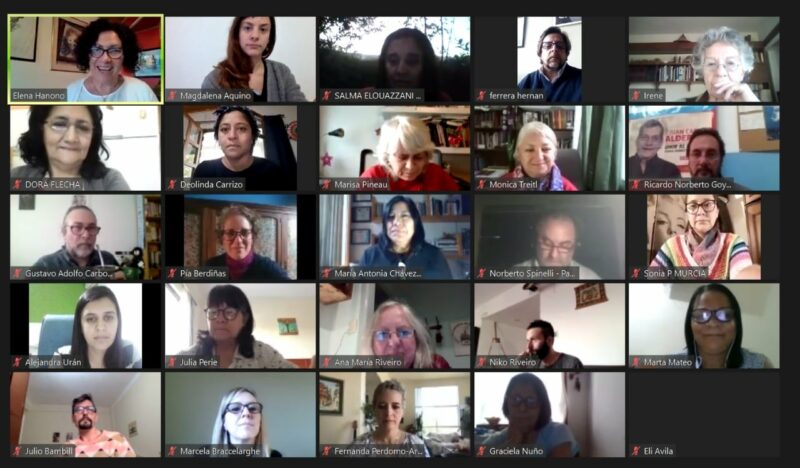