results of the Survey on the Perception of Human Rights

results of the Survey on the Perception of Human Rights

THE REPORT OF THE SURVEY CONDUCTED IN 2018 BY THE CIPDH-UNESCO AND THE CENTER OF HUMAN RIGHTS (CDH) OF THE LAW SCHOOL OF THE UNIVERISTY OF BUENOS AIRES (UBA, ARGENTINA) ON STUDENTS FROM THIS UNIVERSITY WAS PRESENTED.

On Thursday 21 November, the results of the survey were presented at the Red Hall of the UBA Law School, in a discussion panel made up of Patricia Tappatá Valdez, Director of the CIPDH-UNESCO, Natalia Debandi, Director of Programs from the same institution; Liliana Ronconi, CDH Coordinator; Gustavo Maurino, National Director for the Promotion and Strengthening to Justice Access of the Ministry of Justice and Human Rights in Argentina; and  Silvina Zimmerman, PhD in Law (UBA) and Assistant Professor at the UBA Law School.

During the opening, Tappatá Valdez highlighted the alliance with the CDH to “delve into the students’ specific knowledge and information on the rights they should protect”, and referred to young people as “one of the priorities for those of us who work on human rights”. Then, Ronconi read and analyzed the most relevant data and figures of the report. The CDH Coordinator explained that, among all the information gathered, the one which drew her attention the most was that “most of the young people surveyed do not perceive themselves as a vulnerable group”. 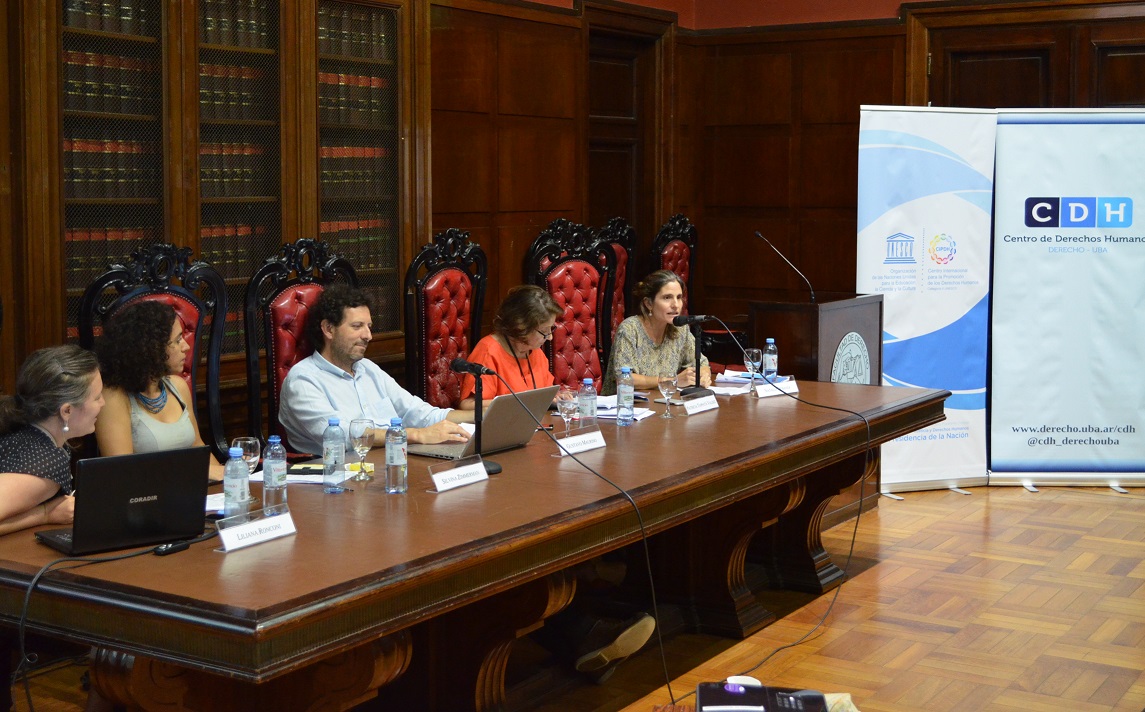 Furthermore, Zimmerman remarked another aspect of the results by stating that “the young people surveyed have great awareness of inequality issues in the enjoyment of human rights in Argentina”. Besides, she also affirmed that the huge positive assessment of these rights in young people “is a cultural battle already won”. Maurino, in turn, expressed that “the survey shows that we need to connect everyday life to human rights even more, since it is difficult to put ideals into practice”. At the closing of the panel, Debandi, the project’s coordinator, pointed out the richness and diversity of the ways the participants envision human rights, as it may be inferred from the answers found in over 750 surveys conducted in April 2018.

In line with the 2030 United Nations Agenda and by means of this tool, the CIPDH and the CDH aimed at getting to know the students’ opinions and perceptions on human rights: what they think, what they perceive, their knowledge and appreciation of the State advances and setbacks in their compliance and its attitude towards the groups in situations of vulnerability, among others. This meant expressing themselves and gaining prominence on issues they are concerned with, apart from generating substantial information for the creation of public policies in relation to human rights education.

The report of the survey on the percepcion of human rights conducted on students from the UBA law school can be downloaded here.