11 February – International Day of Women and Girls in Science

11 February – International Day of Women and Girls in Science

“Too good to be… a woman”
“In the 10th century, in the Benedictine Abbey of Saxony
–one of the free states of Germany– Hroswita’s philosophy,
mathematics and medicine studies revealed intelligence and education.
But according to some 16th century historians: ‘The author’s Latin is too perfect; it was unquestionably a man with a female pseudonym. Unquestionably.”
(At the time, the medical tasks, especially after the crusades, were performed by nuns and abbesses.)
Valeria Eldesztein, Female Scientists. They cook, clean and win the Nobel prize (and nobody knows)

In 2015, through aUnited Nations’ resolution,February 11th was established as the International Day of Women and Girls in Science , in recognition of the key role women play in the scientific and technological community.

Today, in the face of a strong social demand for the recognition of women’s rights -historically subsumed to an unequal relation to men’s-, gender inequality is still persistent and there is no equal access to power and decision-making positions.

The fields of science, technology, engineering and math –known collectively as STEM– are still a stronghold, among others, where male presence is predominant.

Despite the effort of the international community and the work of different organizations that promote women’s and girls’ access to education, training, research and participation in scientific fields at all levels, there are still established cultural barriers that prevent the eradication of this prejudice.

According to UNESCO data, only about 30 per cent of all female students choose to pursue higher education in a STEM field.

Both science and gender equality have always been core issues at the United Nations, particularly in terms of achieving the Sustainable Development Goals (SDG) defined by the 2030 Agenda. That is why highlighting the work of female scientists; fostering the access, full involvement and empowerment of women and girls in science; and promoting the research and creation of female roles in STEM fields, are some of the premises on which UNESCO policies are based.

Although their contribution to science has not been acknowledged for many years, women have achieved important milestones in this field throughout history.

A list with examples from the Spanish magazine XLSemanalfollows:

The first barrier: prejudice and stereotypes

From an early age, children are educated in accordance with roles and stereotypes that mold their interests in adult life. The toy market, for example, reproduces a binary construction of what is traditionally associated with “male” and “female”.

Following is data on Spain, provided by the  February 11 , uinitiative, a group of activists, journalists, scientists who bring to light the work of women in science:

Along these lines, the UNESCO Regional Chair, Women, Science and Technology in Latin America,produced a graphic piece that, with four simple questions, bares some of the most frequent prejudices regarding women and science: 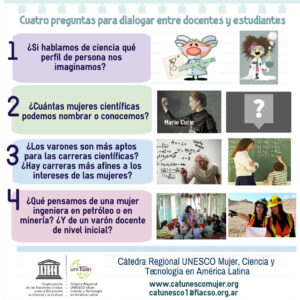 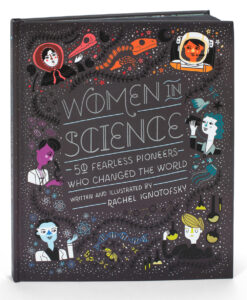 Rachel Ignotofskyis an American illustrator and writer who promotes women’s rights and has popularized the work of female scientists. She is the author of Women in Science (published in English only), where she underscores the work of women who have made a milestone contribution in the field of science. Inspired by the intersection of history and science, Ignotofsky proposes to make scientific literature more accessible and available to all through illustration and the reworking of dense and complex scientific concepts.

Find more information and images from the book here 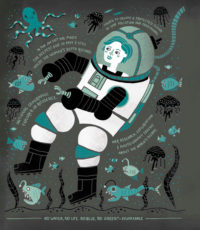 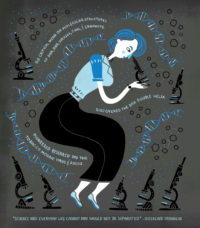 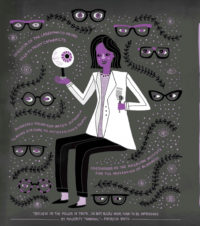 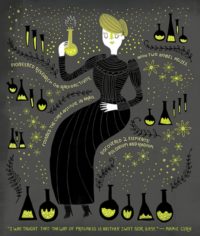 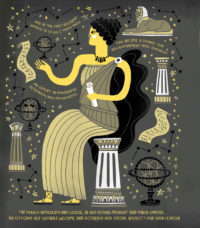 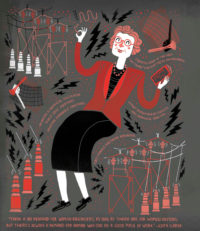