24 April – Day of action for tolerance and respect among peoples

24 April – Day of action for tolerance and respect among peoples

The Armenian Genocide was an attempt to systematically exterminate the Armenian people perpetrated by the government of the Young Turks in the Ottoman Empire between 1915 and 1923.

In Argentina, April 24th was declared the “Day of Action for Tolerance and Respect among Peoples”, in commemoration of the Armenian genocide.

The Armenian Genocide was an attempt to systematically exterminate the Armenian people perpetrated by the government of the Young Turks in the Ottoman Empire between 1915 and 1923, as a result of increasingly violent acts that intensified nationalism. Although there had been killings before, it was on April 24th, 1915, that the Ottoman authorities murdered around 250 Armenian intellectuals and leaders in Constantinople.

Over a million and a half Armenians and, to a lesser extent, Assyrians and Greeks are estimated to have been systematically murdered through methods such as massive deportation, which forced them to walk through the Syrian Desert, where they were subjected to torture, rape and malnutrition.

The UN and the Convention on Genocide

In 1948, the United Nations adopted the Convention on the Prevention and Punishment of the Crime of Genocide, establishing that “genocide is a crime under international law, contrary to the spirit and aims of the United Nations and condemned by the civilized world.”

The Convention, which is currently ratified by more than 130 Member States, defines genocide as any act “committed with intent to destroy, in whole or in part, a national, ethnical, racial or religious group (…): a) Killing members of the group; b) Causing serious bodily or mental harm to members of the group; c) Deliberately inflicting on the group conditions of life calculated to bring about its physical destruction in whole or in part; d) Imposing measures intended to prevent births within the group; e) Forcibly transferring children of the group to another group.” The Convention not only punishes genocide, but also the complicity to commit it, the direct and public incitement, the attempt to commit it and the involvement in genocide.

Argentina was among the first countries that recognized the Armenian genocide. In 1987, the then President Raúl Alfonsín made a public recognition before the representatives of the Armenian community: “I know that your parents, grandparents, maybe even yourselves, came to our land in order to escape from painful circumstances, during an extremely hard time, probably one of the hardest that a society can go through, as was the case with the Armenian genocide of 1915.”

In 2007, Law No. 26,199 established April 24th as a symbolic date to honor the Armenian genocide “in order to make its commemoration become a permanent lesson on present actions and the goals of our future.”

Another milestone occurred in 2011, when the Argentine Federal Justice acknowledge the existence of genocide against the Armenian people in a case based on the “Right to the Truth.” 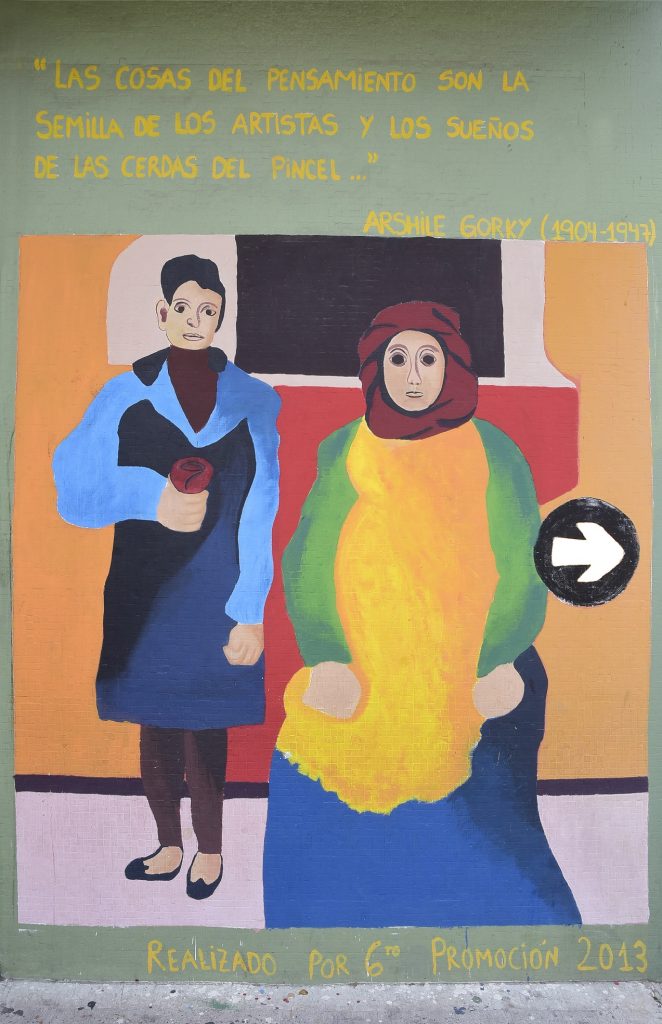 The images that appear on this text are part of the “Murales” exhibition, which was on display from April 27 to May 13, 2018, in the Cultural Space of the Armenian Cultural Association, located at Armenia 1366, in the City of Buenos Aires, Argentina.

Armenia has a population of over three million inhabitants and it is estimated that there are nearly ten million Armenians and Armenian descendants living in the rest of the world. Russia is the country that houses the most: about 2.5 million. It is followed by the United States, France, Iran, Ukraine, Georgia, Syria, Lebanon and Argentina.

Art as a Healing Instrument

“Murales” (Murals) is a project carried out by sixth-graders at Colegio Armenio Jrimian (located in Valentín Alsina, in the southern area of Greater Buenos Aires) that consists in recreating and disseminating works of art from the world cultural heritage. Based on this idea, students intervene the exterior walls of the school and some of the nearby houses.

The school was created in 1930, as many other Armenian institutions, to face the need of Armenian refugees to have a place to gather and protect the values and culture of their people.

“It was the resistance to adversity, the resilience, the drive to live that led to the cultural development by survivors of the Armenian Genocide, a way to express their stories of suffering,” explained Liliana Karagumechian, Director of the Cultural Space of the Armenian Cultural Association, where the Murals exhibition is shown. “Healing, in many cases, has been driven by art,” continues Karagumechian, making reference to the work “The Artist and His Mother” by Arshile Gorky, who escaped in 1915 together with his sisters and compatriots, losing his mother along the way. “This work, which is a heartbreaking testimony, becomes, through reinterpretation, the drive to live of a people who expresses its history,” explains Karagumechian, attesting to the resignification of the work by students and the community (…) or the interpretation of death marches and the suffering of society as a whole, but with the generosity of claiming through art that ‘only what is forgotten dies’,” she concluded. 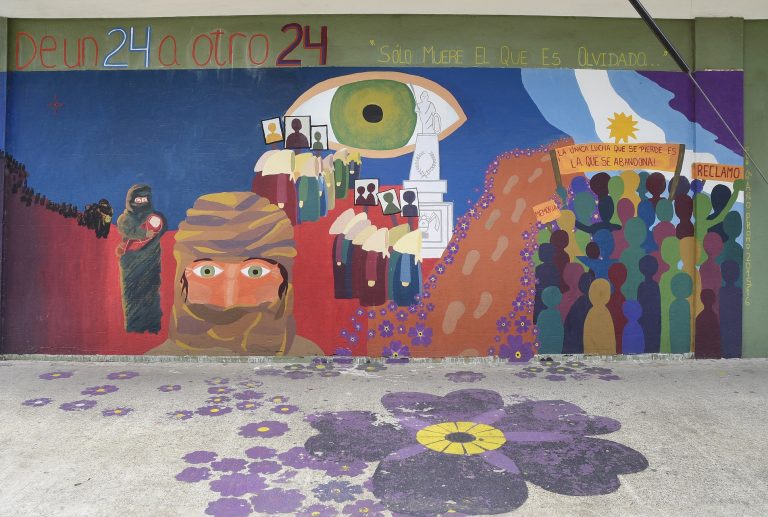 The images that appear on this text are part of the “Murales” exhibition, which was on display from April 27 to May 13, 2018, in the Cultural Space of the Armenian Cultural Association, located at Armenia 1366, in the City of Buenos Aires, Argentina.